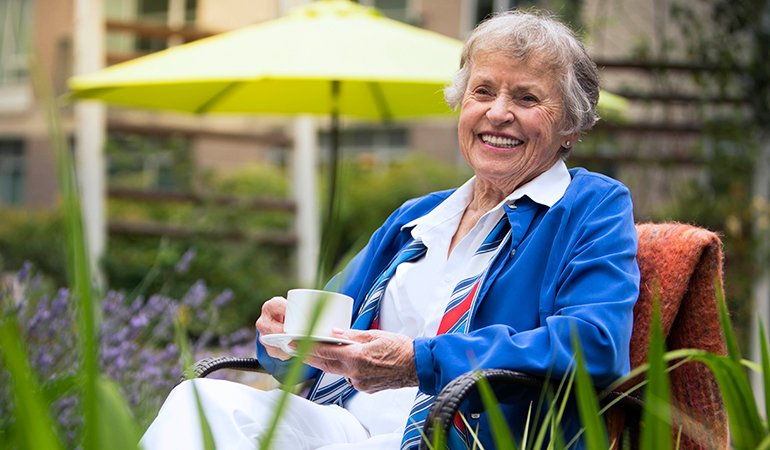 To Mona, life is one big adventure. “My only wish would be to live my life all over again,” she says. With her twinkling blue eyes and sharp sense of humour, she’s always in the mood for fun. When Westerleigh PARC hosted their Downton Abbey Tea Party, most of the residents attended in dress attire and millinery, but not Mona. In typical tongue-in-cheek style, she appeared in a maid’s costume, carrying a silver tea tray, to represent the “downstairs staff” of the series.

Mona spent most of her youth in West Vancouver, where her mother owned and operated a restaurant on the current Park Royal site and Mona later worked for the British Pacific Properties company. She and her husband raised their three daughters in Ambleside and lived in their second home in the area for 58 years. Despite being a long-time native of the area, she was delighted to find one of her childhood friends, whose life had taken her far from Vancouver, living at the Westerleigh when she moved in!

Mona had enjoyed tending the garden in her own home, and admired the landscaping at the Westerleigh. “The gardeners are so knowledgeable…they bring in the most unusual plants.” Yearning for somewhere to sit and enjoy the flora and fauna, she hinted, over several weeks, at a seating area and her wish came true, as the front garden of the Westerleigh now features several chairs, sun umbrella and patio tables, and some events have already been held there. Mona wasn’t surprised. “The staff are excellent here, highly skilled and funny. They bring in the most wonderful people.”

In the fall, Mona plans on taking ukulele lessons from a fellow resident – when asked why the ukulele, she simply smiles, with a glint in her eye, and says “why not?”.

That’s how it is at Westerleigh PARC: residents get involved. They stay active. And pursue passions. They eat healthier and laugh more. And with PARC’s focus on Independent Living+ program, it’s easy to see how life’s just better here.

Book a tour at Westerleigh PARC